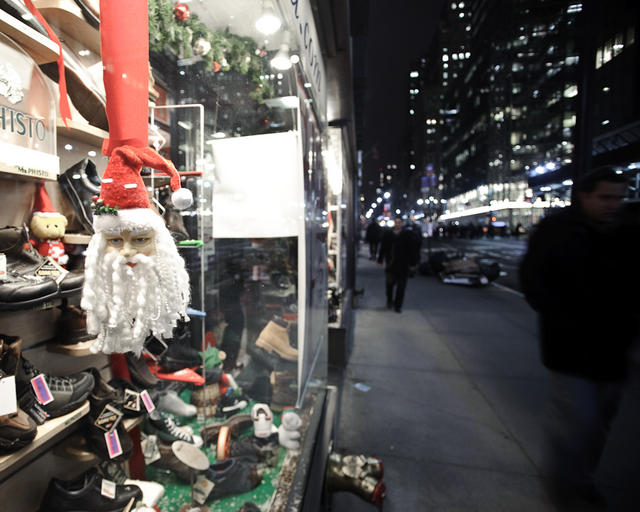 By mike9 December 2009No Comments

Spotted in a shoe store window in midtown. I’ve seen a lot of Christmas decorations in my time, but this has got to be one of the more macabre ones to date. It reminds me of those witch doctors’ shrunken heads you’d see in cartoons and comics. The only things that are missing are lifeless eyes and sewn-shut lips.

I fly out to San Francisco on Saturday. Hard to believe I’ve been living in New York for almost four months now. Time has a funny way of sneaking past you. It’s been an interesting four months, that’s for sure. I don’t know if I feel like a New Yorker yet, but that might partly be due to the fact that I don’t really spend much time in Manhattan. I’ve always equated Manhattan and Brooklyn with New York, and not living in either has me not feeling 100% New Yorkerly. Which is entirely silly, of course. Every borough is just as New Yorkerly as the next (even Staten Island), but there it is.

In any case, I’m looking forward to my flight back. It’ll be weird being in San Francisco as a visitor for the first time in eight years. Maybe I’ll finally get around to riding a trolley.