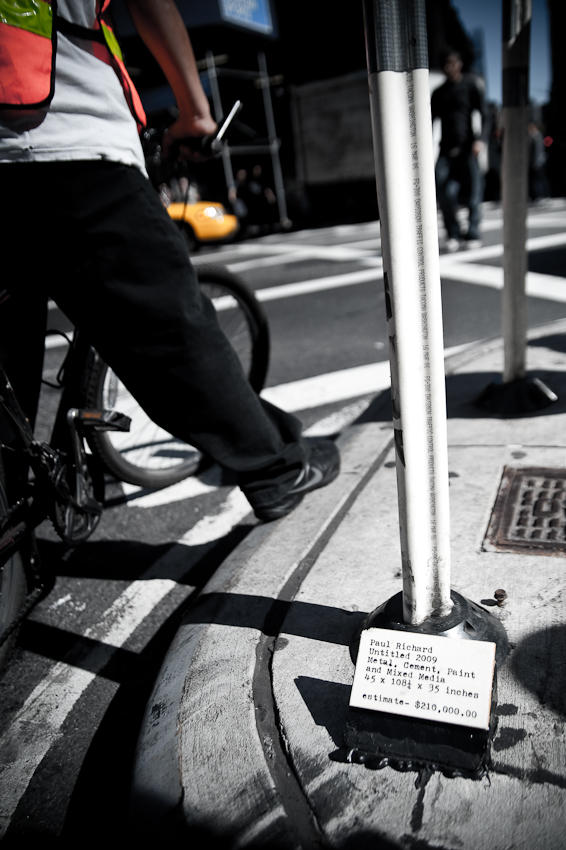 By mike28 September 2009No Comments

There is an old Calvin & Hobbes strip whose punchline reads “The problem with being avant garde is knowing who’s putting on who.”

I came across this little gem the other day while crossing Spring in SoHo the other day. A little bit of internet research later and I discovered that this was by far not his only “installation.” He has also graced the art scene with the Williamsburg Bridge, a tree stump, a traffic control box, and numerous other pieces, many of which I’m sure have yet to even be discovered.

Earlier this month, an ‘artist’ won the Waikato award and a $15,000 prize by taking the scraps left over from other artists’ entries, slapping a name on it, and submitting it. Actually, he didn’t even do it himself. He sent a message to the art gallery staff, asking them to collect all the scraps and rubbish. Which he then submitted.

Needless to say, the other artists were outraged.  They had toiled and slaved over their installations for hours, and here was a guy who did nothing but come up with an idea and a name and he scooped them all.

I’ll be the first to admit I’ve never really been one for modern art. I never really “got” it. My knowledge and appreciation for art is summed up best by the old saw, I don’t know art, but I know what I like. Though there’s a second, less-popular saying that also seems to apply here.

The tricky thing about art as a concept is that it’s largely indefinable. Because it’s so personal and so subjective an area, who’s to say what is art and what isn’t? Which, of course, makes it hard to tell the artists from the arseholes. If your justification sounds plausible enough, you can pass anything off as art. And really, anyone who’s written a High School English paper probably has the bullshitting chops to pass anything off as art.

In the end I suppose art is not unlike capitalism — the success or failure of anything depends entirely on the market’s willingness to accept it. Which, sadly, doesn’t mean much when the ‘art scene’ is filled with sheep so pretentious they’ll buy anything if the right person tells them to. Coincidentally, there’s a saying that applies there, too. Something about a fool and his money.