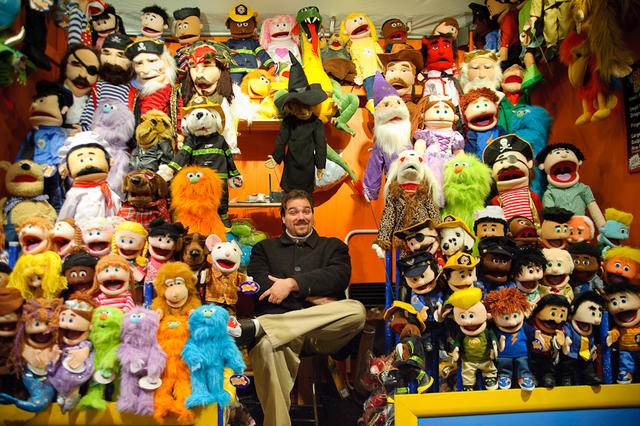 While wandering around the Flatiron earlier, some friends and I happened upon a row of stalls, mostly selling crafts items, art pieces, and the like. One of the stalls was for a company called “Silly Puppets” selling, well, I think you can guess.

Needless to say I bought one. The green monster thingie on the front row toward the left.

I still haven’t named him yet. I’ve had a number of good names suggested to me, but so far none of them have felt “right.” Which is an odd thing to say, when you think about it. After all, it’s just a puppet. Why should I be giving it a name at all, let alone a ‘fitting’ one. And for that matter, what is a fitting name for a puppet?

We seem to have this obsession with anthropomorphizing the things around us. We name our cars. We talk to (okay, yell at) our computers. We feel bad for old lamps when they are left on curbsides.

Why do we do this? Is it an attempt to relate to the things around us? To make them more real to us? More important? If we see a stray wandering around our yard, it’s a cat. If we take it in and give it a name, it’s a pet. A member of the family.

I read a story earlier today that ended with a small group of animals dying. Under normal circumstances, this would be sad but little more. But because they had been given voices and because I had followed their exploits and partaken in their dramas, their deaths were heartbreaking. Even though I know animals can’t really speak and are not subject to the same dramas that afflict people, because some author had decided to make them more like people, it broke my heart to see them perish. The same way I feel a tugging at my heartstrings when I see a lamp sitting in the rain while sad music plays.