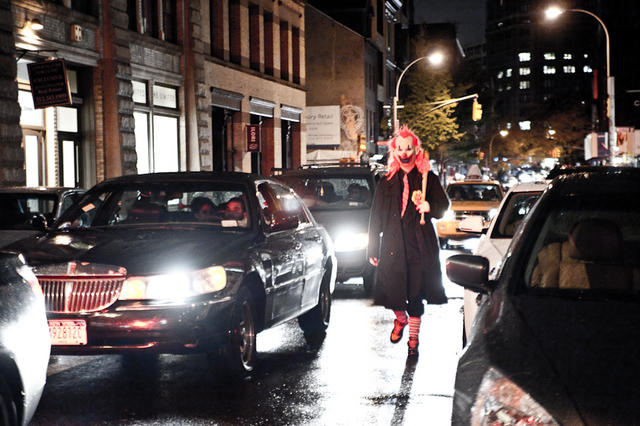 I don’t care what day of year it is, a clown walking through traffic with a baseball bat is creepy. Not so much in a “Pennywise” kind of way as a “Joker is going to blow stuff up” kind of way, but creepy all the same.

Experienced my first New York Halloween tonight. I was, to be honest, somewhat disappointed. Overwhelming crowds made it impossible to see the parade, and the sea of people made joining the parade even more frustrating an endeavor.

We eventually just gave up and got ‘far from the madding crowd’ by making our way to a nearby restaurant to recharge. The company was good, as was the food and drink, though even that was sullied by the obscenely loud table of drunken revelers that hooted, whooped, and hollered anytime someone with a costume walked past the storefront. A lot of people walked past the storefront.

I suppose in the end I’m just not much of a street-partier when it comes to Halloween. When I lived in San Francisco I would stay as far away from the Castro Street party because it was just a big sardine can of bodies and limbs. I suppose I’m more of a house party guy, where the booze is free, the company is welcome, and there’s always somewhere to sit.

And it very rarely rains indoors.