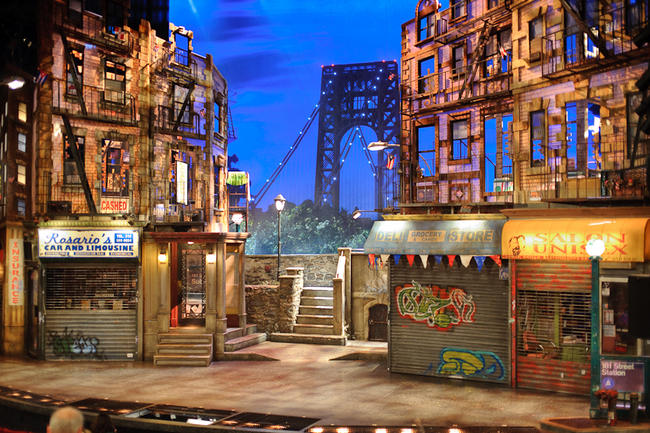 in the (safe) heights

My mom was in town for the weekend, so she, my sister, and I went to see In The Heights this afternoon. It was an interesting experience. The show itself, from the performances to the music to the book, was fantastic (despite a somewhat-convenient resolution to one of the plotlines at the end of the play), but it was more the experience as a whole that was noteworthy.

Such as the quartet of septuagenarians seated in front of us who, during intermission, talked amongst themselves about texting and twitter.

“It’s actually very easy,” one said to the other. “I’m surprised you don’t do it. What are you, a dinosaur?”

All the while, my own nigh-sexagenarian mother was beside me, updating her Facebook status to report what we were seeing. It was all very meta.

Or the elevated orchestra seats, where the rear half of orchestra seats are on an incline so that you have an unobstructed view. This one was more awesome than odd, but still noteworthy. It was actually better than some seats in the front half, because they were all flat. These seats had the closeness of the orchestra with the better view of the balcony, all rolled into one.

Most of all, though, I think the thing that tickled me most was the sheer irony of having a musical about life in Washington Heights (in the 180s) played for an audience that has — as the joke goes — never been above 96th street. It’s like experiencing the jungle by watching National Geographic Channel. All the exposure to an exotic locale with none of the risk. I can almost picture a conversation taking place a few weeks later:

“Trust me, life is hard in the barrio. How do I know? Oh, I’ve seen The Heights.”

And his audience of a handful of friends all ooooh, impressed.

“I even drove through there once, on the way to The Hamptons (long story). They weren’t nearly as colorful and vivacious as I expected.”

One of my favorite parts of the evening, however, occurred before the play started. I didn’t want to get thrown out for taking pictures, so as I pulled the camera from my bag, I called to a nearby usher.

“Excuse me, sir?” I asked of the older gentleman in the usher’s uniform. “Are we allowed to take non-flash photography before the show?”

“Actually, you’re not allowed to take pictures at all,” he replied.

I started to respond with a thanks-i-understand, when he cut me off.

And with that he walked away.