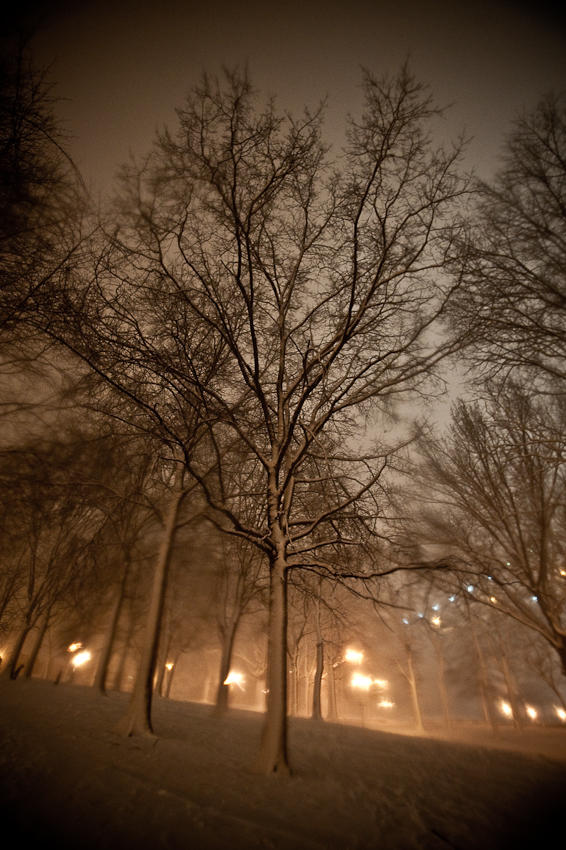 Earlier tonight I had the brilliant idea to go out into the driving snow and freezing cold, and take some long-exposure shots of the Triboro Bridge. I won’t bore with the details, but the high moment of the outing involved me standing by the freezing East River, 25mph winds sandblasting my face with sleet and snow while my umbrella whipped around me, my tripod threatened to topple over, and frost and sleet accumulated on the front of my lens as it was exposing.

Giving up the excursion as lost, I packed it up and headed back to the apartment, taking some hand-held shots along the way. It wasn’t until I got back and started going over the photos that I realized I hadn’t cleaned all the slush off the lens. What little had remained blurred and obscured parts of the outer rim of my lens, giving photos this ethereal, glowy quality to them.

The longer you shoot, the more you get used to things like this, these “happy accidents.” Photos where the thing that makes it work the most (or at least one of them) was completely unplanned. It happens more often than one would think. For all the control you try to exert on your shoot, making sure that everything — the gear, the location, the talent, the lighting, the timing, everything — is exactly as it needs to be, randomness always manages to creep in.

It used to give me pause; how good a photographer could I possibly be if some of my most memorable, most lauded, most beloved photos were products of chance? Eventually I started to realize that chance is always a factor, but it doesn’t run the show. The camera didn’t fall out of your bag, land on the shutter release, and take the photo. It was the photographer who put it in the right place, at the right time, under the right circumstances, and took the photo. There was still talent and skill involved with that.

That said, I really love the old-timey feel to the photo. I actually didn’t have to do much post at all. The low light gave the photo the reddish tint; all I did was tweak contrast and levels a little, and built on the vignette caused by the sleet and the corners of my ultrawide. Everything else was like that when I got there.