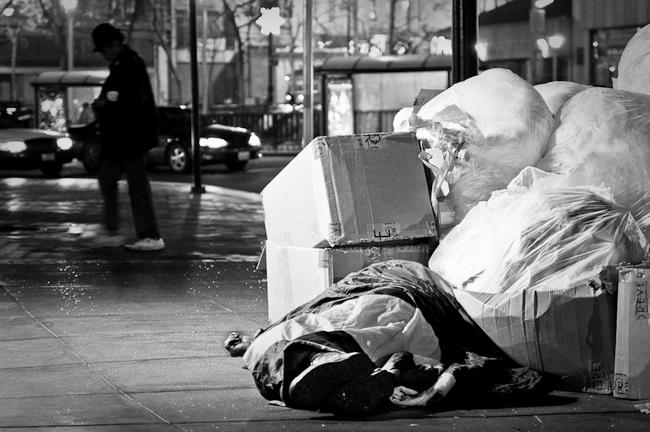 By mike1 January 2009No Comments

Not a minute after taking this photo, a man (also homeless, as it turned out) happened by and we got to talking. About a few different things, but mostly about people and the inherent importance of human connection.

It’s strange how we tend to decide which people are “worth” connecting with and which ones aren’t, usually based on something as largely unimportant as their station or what they do for a living or how attractive they are. Even people from whom we’re not looking to gain anything.

I suppose that since there isn’t enough time in the world to connect with everyone, we subconsciously compartmentalize the people whose paths we cross and decide whether or not they’re worth our time. We automatically assume that we can’t relate to or have nothing in common with people not of “our walks,” so we ignore them. The stockbroker at the bus stop is less likely to strike up a conversation with the old Mexican lady than he is the young woman in a business suit because he figures he has more to talk about with the latter than the former. The sad irony, of course, is that people more like ourselves are a lot less likely to surprise us.

You don’t develop much of a palate eating nothing but variations on the same basic meal.