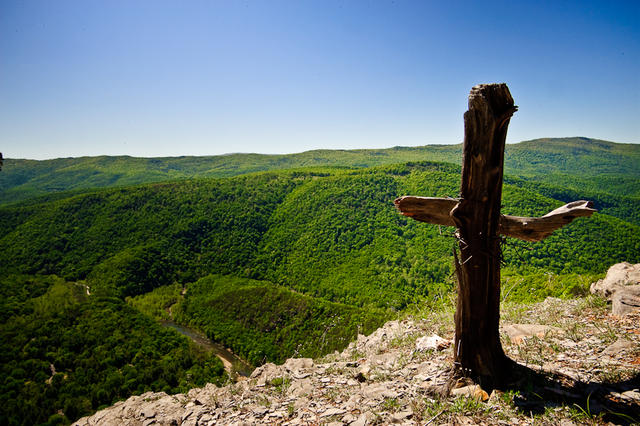 While camping in West Virginia, we spent one of the days hiking a small mountain. It’s hard to tell from the photo, but we’re actually at a summit a few hundred (maybe even a thousand) feet up.

After eating our lunches on and enjoying the view from the summit, we decided to make our way down. As we left the plateau, I noticed this cross, right by the edge.

It was pretty clearly man-made, as evidenced by the barbed wire that was used to hold the cross-plank. I can only assume it’s there because someone slipped and fell off the mountain.

The more I looked at the cross, the more I wondered. How old was it? Who had fallen? What had happened? Were they old? Young? Male? Female? How many people were in their party? What must it have been like, the terror and panic and chaos? Who left the cross there?

I looked for a name on the cross but didn’t find one. And as I had to get close to the ledge — the very ledge that I presume this person fell from — to see the front of the cross, as soon as I saw there was no name I retreated.

Be funny if it had actually just been put there by a local in order to keep hikers on their guard by letting them think someone had died there.