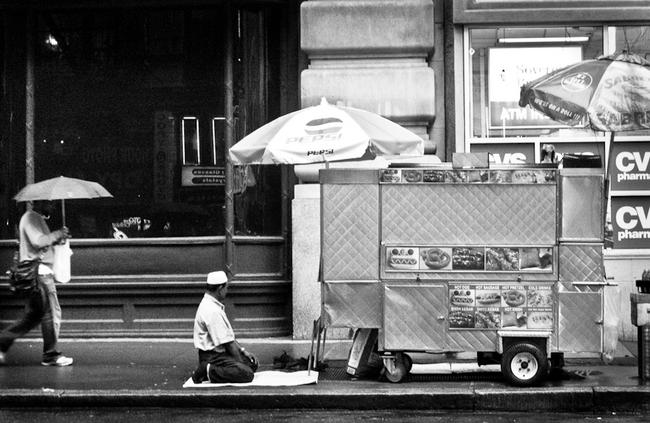 By mike23 September 2009No Comments

If I had to guess I’d say a good 80-90% of street meat in New York comes from halal carts, and while I do enjoy the food these guys offer, I have to admit that the lack of variety does tend to get a little old. Other major cities generally embrace food cartery and you don’t have to go far to find different types of food, all sold out of roach coaches and trailers and little pushcarts. Portland’s even built a bit of a cottage industry around food stalls. So much so that a lot of the best places to eat in downtown Portland are sidewalk shanties.

Not so in New York, however. If you want some sidewalk fare, your choices are hotdogs and halal.

I’d always wondered how they managed to corner the market on street meat carts so thoroughly. While it’s true that certain ethnicities tend to gravitate toward certain careers (Filipinos, for example, practically run the San Francisco/San Jose/Oakland airports), I’d never really seen a penetration as heavy as there seems to be with the street meat carts. And even in other professions that see a heavy leaning toward certain ethnicities, it’s almost never at the exclusion of others. So what was different with the New York street meat?

As it turns out, it’s because the street meat market is run by the “Halal Mafia,” a collection of veteran cart vendors that bully, harass, intimidate, and threaten anyone trying to set up a food cart.

I can’t help but find it a little ironic that people who claim to keep halal (essentially the Muslim version of kosher) would engage in acts so haraam (un-kosher). Apparently even a city as massive as New York still isn’t big enough more than one type of street meat.