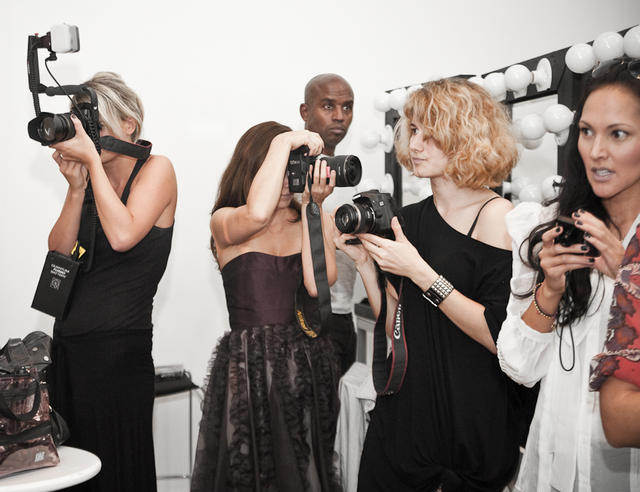 By mike22 September 2009No Comments

I shot my first fashion show while off on my forced hiatus, specifically the show for Allison Parris. It is with no exaggeration when I say that there were more people with cameras than there were models. Though I suppose it’s to be expected, it was still a little surprising to see. Prior to the show the small backstage area was a zoo of people, clothing, and camera gear.

One of the nice things about being at an event with a massive surplus of shooters, however, is that it gives you a little more freedom. When you’re working solo or one of two or three photographers, you’re expected to be everywhere and capture everything. When you’re one of about a dozen, however, you’re free to shoot what you will.

I opted to stay backstage the entire show, largely because the photographer’s pit was at capacity, but also because no one else was back there. It let me get a singular behind-the-scenes perspective of the show. And, much as I enjoy looking at and photographing beautiful women, shooting backstage was less of fashion photography and more of documentary shooting, my personal preference.

I do have to admit that I was surprised at how quickly the show was over. Hours of preparation and buildup, and then the event itself barely lasted ten or fifteen minutes before it was done and everyone was going home.

Why does that sound so familiar?