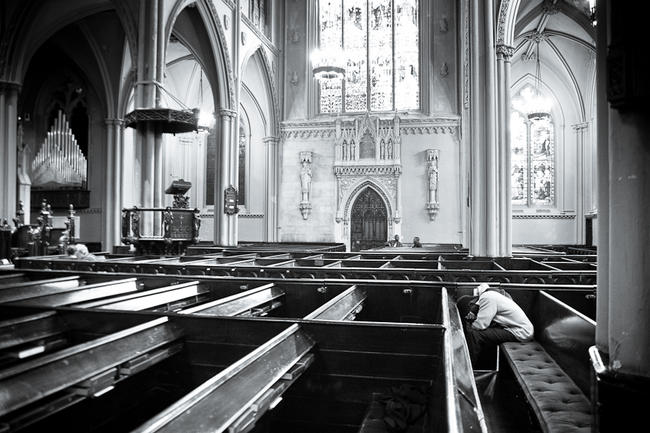 Even though I’m not a religious man by any means, I cannot set foot into an older church without feeling a wave of peacefulness come over me. I suppose part of it has to do with my Catholic upbringing and all the Sundays spent in old churches, reciting hymns and reading psalms, but I think it’s more than that. There’s something about the atmosphere of an old church — the grand architecture, the solemn silence, the calming sunlight as it streams through stained-glass windows — that immediately makes one feel at peace. Small wonder, then, that so many consider it safe haven. It’s a welcome shelter in the storm when you have nowhere else to turn. A safe refuge from the hounds at our heels.

It felt almost invasive to take this shot earlier today. Even though I did not expect him to look up and see me, it felt vaguely .. exploitative .. to intrude on so personal a moment between this man and his god. But I suppose that’s a large part of being a photographer; in order to properly capture and portray the world you see, you have to be willing to step out of your own world and into those of others. Even if they don’t always appreciate it.

In the end, however, I think it’s worth it. Then again, I wouldn’t be doing this if I didn’t.