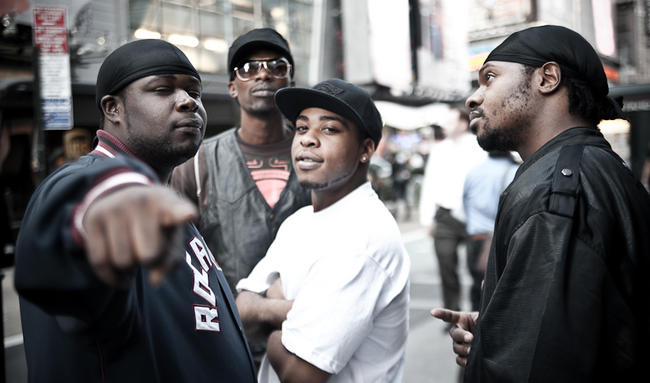 It’s interesting how, even in today’s world of dSLR saturation, people will still respond differently to certain people carrying cameras than they will to others.

At the end of my solo photo walk yesterday, I found myself in Times Square. As I crossed 41st to grab a dog, I hear

Wearing sunglasses at the time, I assumed the voice was calling for me. I turned to find a group of four guys calling me over. We shook hands and they launched into their usual pitch, one I’d heard before. They were selling copies of their CD and wanted to sell me one. I apologized and said I had no money (which was true; other than the $5 I planned on using for my dinner hotdog, I was tapped).

“That’s cool,” they said, then immediately followed up with “yo, take our picture!”

Before I even had my camera up to eye-level, they’d already struck a pose. And not a bad one at that. The guy in the white tee could’ve stood to move a foot to his left, but other than that it was a decent pose for something they struck on the spot. Odds are it’s a pose they’ve used before, but still.

I fired off a few shots, showed them the photo on the LCD, and then got their group name and email address. At least, I think I got their email address. I feel like I misheard it or didn’t write it down correctly. Guess we’ll find out if the email bounces.

As I walked away I started to wonder if they ask anyone with a camera to take their picture or if it was just me. Somehow I can’t imagine they turn to many portly Midwesterners or German tourists and call “Yo! Yo, Inga! Take our picture!” Yet at the same time, why me? Sure, my camera is a lot more “pro” than “sumer,” but unless you really know your dSLRs it’d be hard to distinguish it from a less advanced model. Did I have an air of “photographer” about me? Did they figure I didn’t look like a tourist and therefore could only be in Times Square with a camera because I was out shooting? Or did they not care and I just happened to be in the right place at the right time with the right piece of hardware?