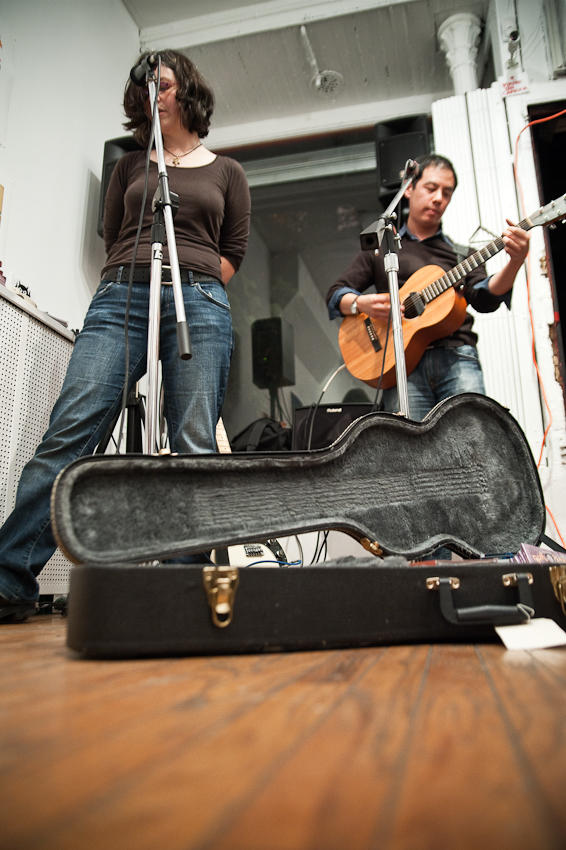 By mike3 October 2009No Comments

Sadie and Han, of The Invisible Cities, playing at Giant Robot NYC. They’re on the last leg of their Follow Your Whim tour with Goh Nakamura, who’s also one of their members (Goh was a solo artist first, so he does a set with them and then a set by himself). I’ve actually shot Goh in the past,  as I’m a big fan and have been following his career ever since a good friend introduced me to his music (and, later, to him). So when I heard about the FYW tour and that he’d be playing New York shows, I naturally hopped right on board.

Tonight’s gig was at Giant Robot, a toy/art/specialty store in LES/Alphabet City. The store itself is pretty small, barely eight or ten feet wide and about thirty feet deep, and it was packed to the rafters with folks who had come out to see Goh, The Invisible Cities, and Eric Lai, who opened for them.

Needless to say, it was a great show. The small venue made it an all the more intimate show (which suits their music perfectly) and since they had free reign they were able to play as long as they liked. What was supposed to be a two-hour show ran a little over three hours and nobody minded one bit.

I’ve said before how much I prefer intimate venues to massive ones and it still holds true. Huge arena rock has its place, but for the most part the draw is about the experience first and the music second. It’s about adrenaline and crowd frenzy and freaking out when they play your favorite song. Smaller venues, meanwhile, are about the music first. It’s about you and the musician and being able to hear and feel what’s being played as it’s sung not ten feet away from you. No arena could ever compare to that.

They have another show tomorrow night that I’m hoping to make it to, in a house in Prospect Park. I can’t think of a more intimate setting than that. I can’t wait.