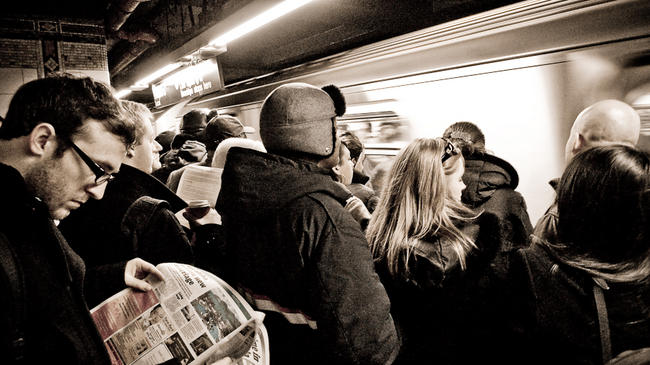 Contrary to popular myth, New Yorkers are not assholes.

What people tend to perceive as being an asshole is really just being too busy to bother with idle pleasantries. It isn’t that they’re jerks, it’s just that they’re usually in a rush and if you were to stop one to ask them for directions, your answer would be less of

“Aw, new to town? Where you from, hon? That so? I’ve got cousins up there! Beautiful in the fall. So anyway, what you wanna do is go up this street until you get to the second Duane Reade on your right. Then you’re gonna wanna take a right and head down to Third and it should be right there. With the green awning. Oh no problem. You too, buhbye.”

New Yorkers, like anyone else in the world, are normal people with normal temperaments and normal personalities. And they’re just as friendly, helpful, and nice as the next guy.

Right up until they get on a train.

The minute a New Yorker gets on a train, all bets are off. What might pass for a civilized society above ground turns into a free-for-all under its streets. Stock brokers, school teachers, pastors, deacons, and all manner of person shed off their friendly personae when they enter the tunnels of the New York transit system. They are no longer men, they are morlocks in a Wellsian nightmare.

The little old ladies are the worst, pushing and shoving and cursing and stabbing you with their umbrellas. They might be somebody’s sweet ol’ gran-gran by light of day, but down in the dark they are little more than hellbeasts in muumuus.

I’m not sure what it is about the subway system that turns people into such animals. Perhaps it’s the lack of daylight. Or perhaps it’s the stress of commuting; there’s a direct proportionality between the bestial nature of riders and how packed the trains are. Or maybe it’s that people feel free to be their ruthless selves, their anonymity protected by the dank and the shadow. Odds are, though, it’s a combination of the three and other things not even considered.

The only time there is a break in the savagery is when they find an enemy-in-common to direct their aggression toward: the MTA. Turn enough local trains express, make people wait long enough for a train that should’ve been there twenty-five minutes ago, trap them in a tunnel long enough because of “train traffic ahead,” and you’ll find that even the worst of enemies will band together in solidarity and snark.

People who were shoving and pushing each other not a second ago are not brothers-in-arms, rolling their eyes together and grumbling under their breath together, bound in a common disdan for “those jagoffs” at the MTA.

Of course, this accord only lasts as long as the problem that brought them together in the first place. Once the system is running smoothly again, they’re back at each others’ throats, punching and climbing over each other to get onto the train, slowing things down for the train behind them.

And then they get off at their stop, climb the stairs out of the station, and go back to being stock brokers and school teachers and pastors and deacons, their abhorrent behavior left behind in the dark, anonymous, shadowy catacombs of Manhattan.