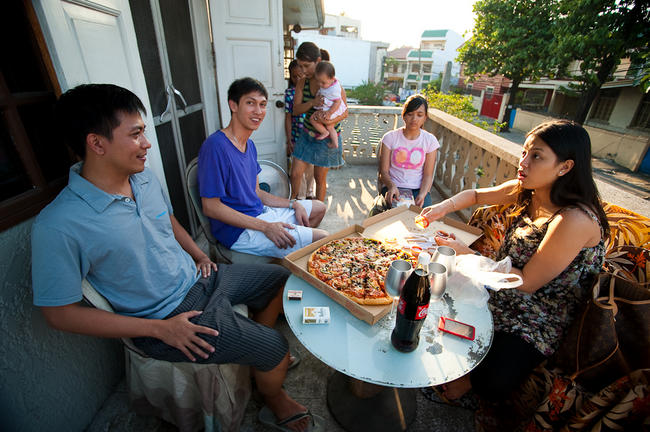 By mike6 April 2010No Comments

Today presented an interesting situational dichotomy as I spent it hanging out with different friends. In the morning, I met up with a good friend of mine, Iñigo (in whose spare bedroom I’m crashing while in Manila) and some of his friends for lunch. We ate at a nice upscale Japanese restaurant before retiring to one of the friends’ houses for sangrias.

The house was in one of the more well-to-do neighborhoods; absolutely gorgeous, with a hammock on the patio and a small zen gazebo by the pool,  was tastefully decorated and beautiful. She had moved into it with her 8-year old son after they returned to the Philippines from Barcelona, mid- last year. It was just the four of us at the time. We sat on the patio, enjoying the balmy breeze as we talked and made sangrias. I wasn’t able to stay long before I had to excuse myself to meet up with another good friend, Neil.

The contrast was undeniable. Neil lives with his wife and three kids in the same house he’s lived in for as long as I’ve known him. And while not in a necessarily bad or especially poor neighborhood, no one would ever confuse it for the neighborhood I’d just come from. Not long after I arrived, two of his friends showed up (their own newborn in tow), and we all hung out on the patio, eating (tasty) pizza and drinking rum cokes. A far cry from–and, to be honest, more to my tastes than–the haute Japanese and sangrias I’d had earlier today. At various points of the meal, Neil’s three kids filtered in and out, sharing in the pizza. Anywhere from six to eight of us sat around the low table at any given moment, eating and drinking and kicking back, as the same balmy breeze took the edge off the hot afternoon.