When I had arranged my last trip to San Francisco, the very first thing I did after booking my flight was send out an email to Paciano Triufo, Ann Borja, and Roczane Enriquez, photographers and make-up artist (respectively) extraordinaire and good friends from my theatre days with Bindlestiff. I’d always wanted to work with on a shoot but had never had the chance, so when the chance presented itself, I hopped right on it. 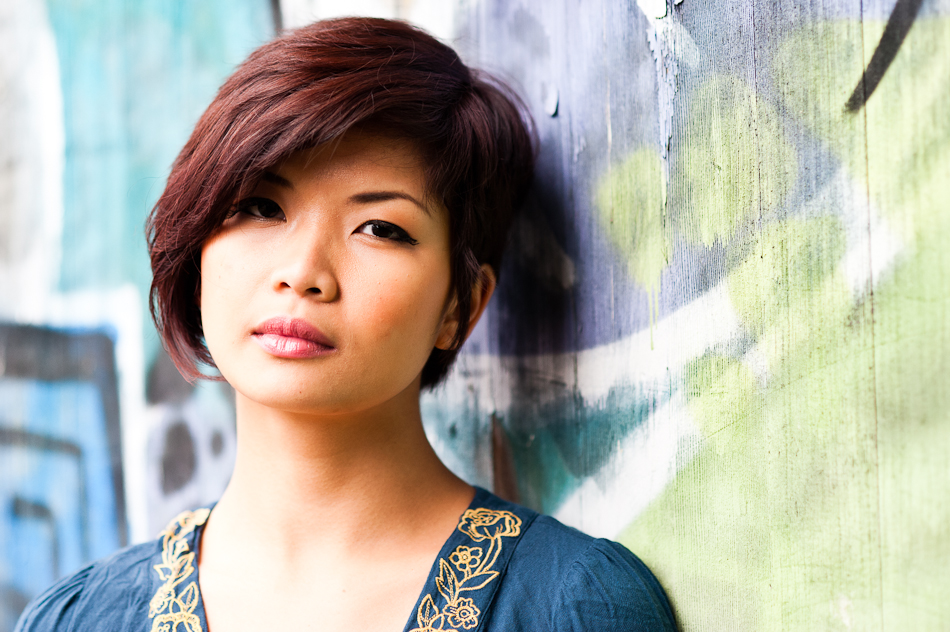 For a good two months we coordinated the shoot via email, assessing locations, wardrobe, makeup, the whole kit and kaboodle. I’d always wanted to add an outdoor fashion shoot to my portfolio, something bright and airy and light and fun, so we decided on Briones Regional Park, a beautiful park with no shortage of wide open pastures and dales for us to use as a backdrop. We would meet up on a bright sunny Saturday and proceed to hike out into the wilderness for our shoot.

At least, that was the plan. 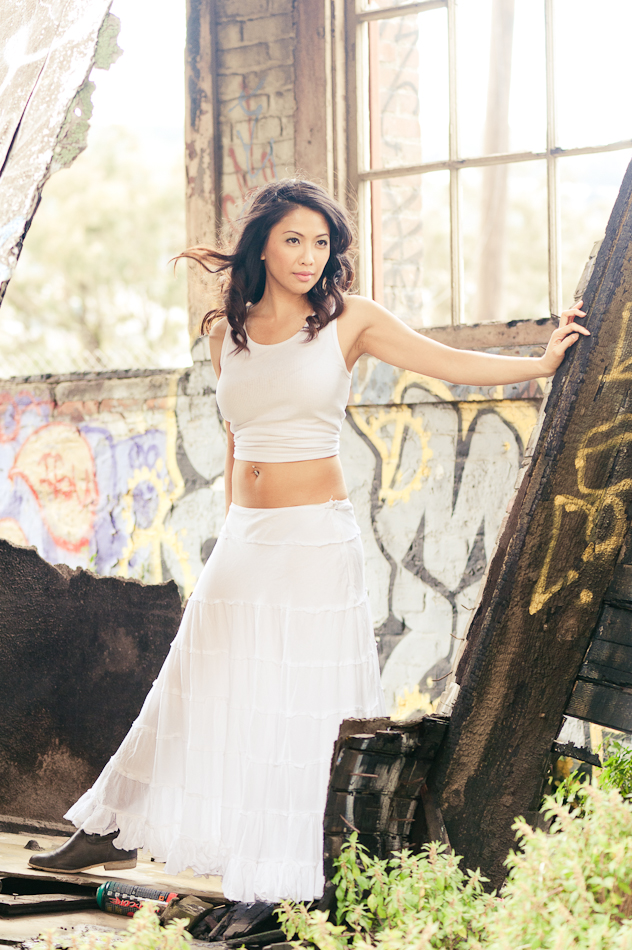 The reality turned out to be a very rainy, overcast week that showed no signs of letting up by the weekend. When Thursday rolled around and the weather reports only reinforced that it would be a very damp Saturday, we hustled to come up with a Plan B. In addition to versatility, guerrilla theatre teaches you adaptability. We were none of us strangers to last-minute changes of plan, and this was no different (in fact, I had later joked that it wouldn’t be a Bindlestiff production if there hadn’t been some amount of Eleventh Hour scrambling).

And scramble I did. I had decided to go in the opposite direction with our Plan B, aiming for a more urban decay kind of feel, which meant that I spent my entire Friday driving all over the Bay Area in search of a decent abandoned location for Saturday’s shoot. Apparently this was something much easier in theory than in practice. 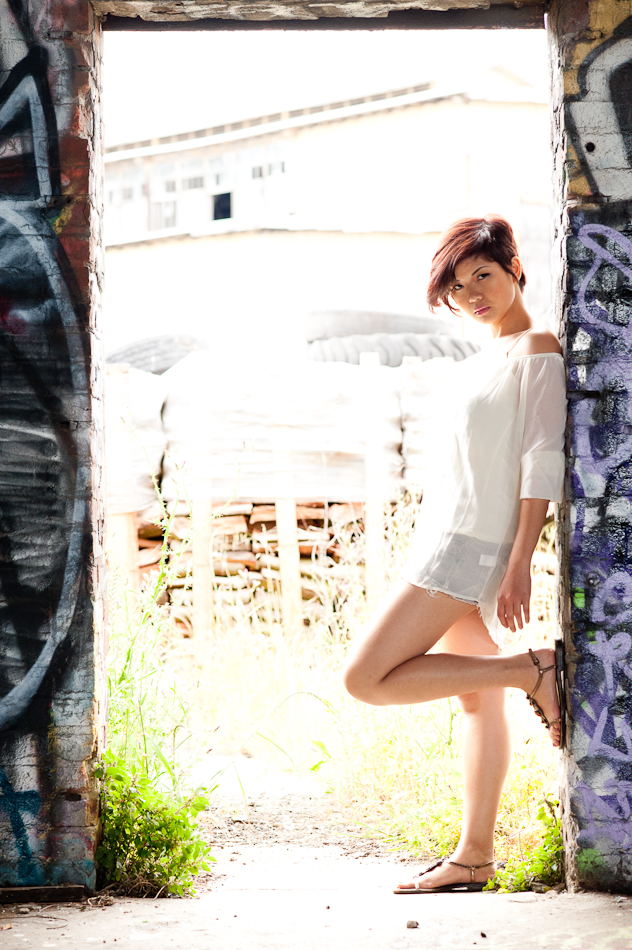 For eight hours I drove up and down the Bay Area, from the Marin headlands to San Bruno and all points in-between. As it turned out, a lot of the places that the Internet had assured me were choice abandoned locations were, well, not so much. An abandoned hospital had been turned into high-end condos. Deserted military bases were now residential areas. Missile Bays were suddenly inaccessible by road despite claims to the contrary. The list went on. Every new location presented a new disappointment. Where was the urban blight I had been promised?

Desperate and with the day quickly drawing to a close, I found myself back in front of a computer, scouring the Internet for anything I might have missed. The problem I had discovered was that most of the resources were years old and largely unreliable. Still, I had no real alternatives so I continued to Google away. 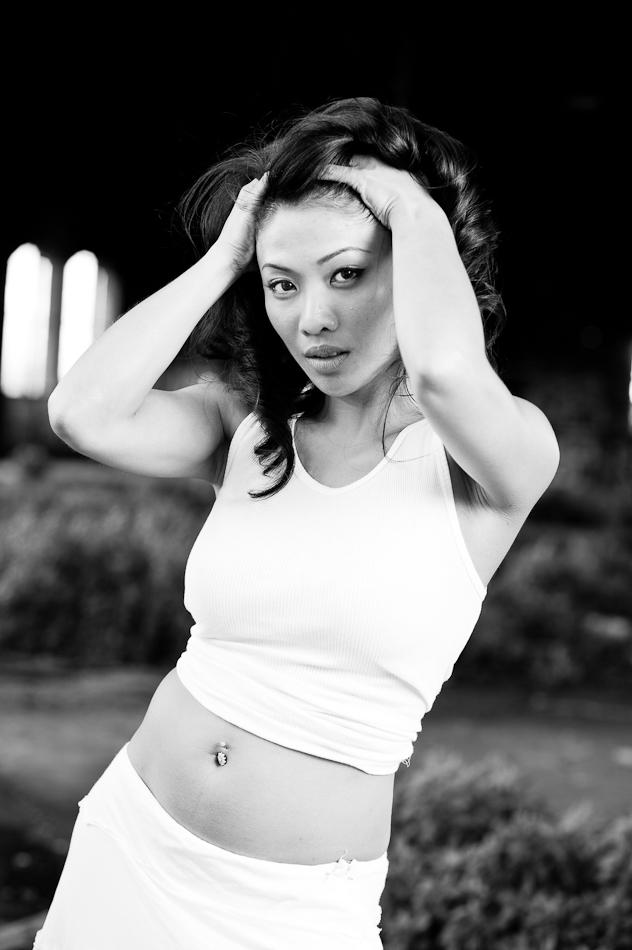 Then, finally, a lucky break. One of my search hits took me to an SF Weekly photo gallery entitled “Abandoned San Francisco” with (and here’s the lucky bit) the name and website of the photographer. There was no indication of when the photos were taken, but it was the best lead I had so far. I visited Joseph’s site, rejoiced when I found a phone number (there was no time for email) and called him.

One hasty, panicked explanation of my predicament later, and Joseph clued me in to the Bayshore Roundhouse, an old “train garage” (for lack of a better term) that had been abandoned for years. I immediately drove out there to find a large, decrepit, open structure in the middle of nowhere. Half of it had burned down, leaving only charred wreckage and dangerous scrap heaps. The half still standing was covered in graffiti and littered with broken bottles, discarded cans, abandoned mattresses, and garbage in every corner. 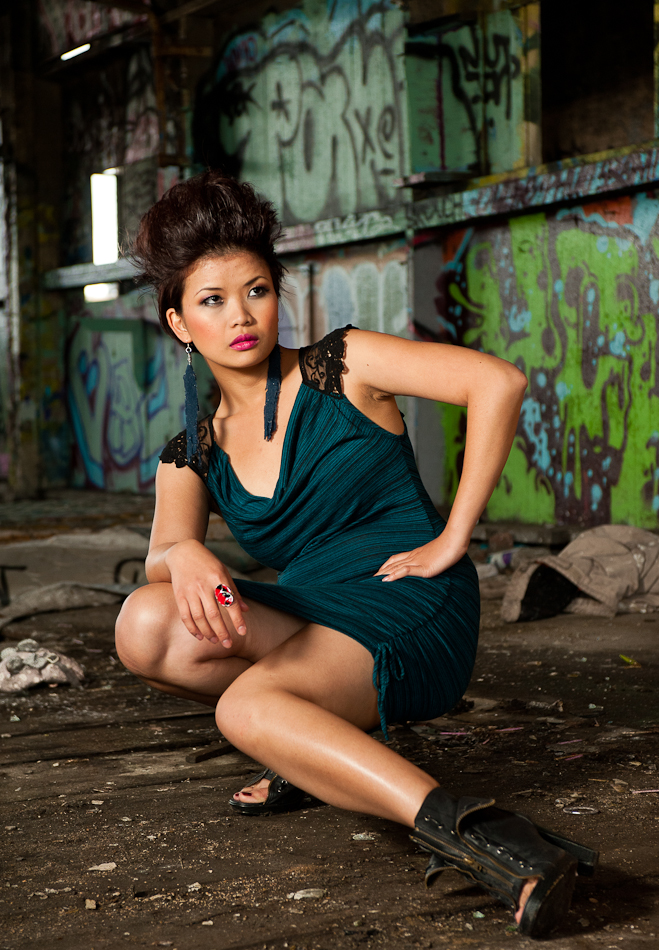 We arrived the next day to discover that I wasn’t the only person who thought it a perfect location. In one of the corners of the roundhouse, a small crew was setting up to shoot a music video by the time we got there. Luckily it didn’t affect our shoot all that much, as they kept to one area and left us plenty of room to play in. The music was a bit on the loud side (durned kids!) but beyond that things went fairly smoothly and the five of us (a late addition to our merry band was Kat Paule, a friend of Ann’s and talented hair and makeup artist) were able to go through the shoot without a hitch.

So much without a hitch, in fact, that despite an early morning rain dump the rest of the day was sunny and gorgeous.

Note: More photos can be found at my Flickr set