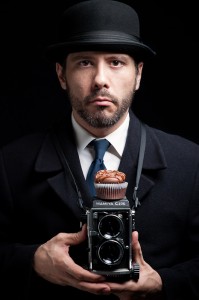 Little-known (unless you’ve ever met me) fact about myself: I have a tendency to overcomplicate things. Present me with a question and I’ll often find the more convoluted solution. It still works (and often well), but it’s also needlessly complex. This can be a bit of a sticking point for me, as photography—portrait photography especially—relies on simplicity. As with all storytelling, you only want to include elements that serve the story; if it isn’t an enhancement it’s a distraction. And when you’re the type for whom Occam is the sound of someone clearing their throat, overcomplication can lead to some unnecessarily-involved shoots.

Like when I recently spent three hours on a shot only to have it trumped by the photo that took three minutes.

My sister had approached me for a submission for a calendar she was putting together. The theme was essentially “Bearded Men with Cupcakes,” and the sample images she sent me showed various whiskered friends and family posing with cupcakes. The assignment sat in the back of my head until one day, walking home from the train station, I had a brainstorm. I would do an homage to Magritte’s Son of Man. It didn’t quite fit the feel of the other images, but it was so clever how could anyone turn it down? I was so excited about the idea that I didn’t bother running it past my sister; I wanted it to be a surprise.

(I think you can see where this is going.) 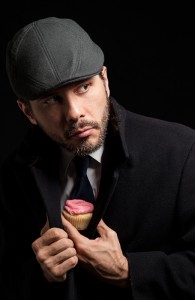 Determined to get it all in-camera and not resort to compositing, I suspended the cupcake in front of me for the shot. Without an assistant to hold the cupcake, I ended up using a combination of a yardstick, two chopsticks, a couple clamps, and a throw pillow. Crude and time-consuming, but it worked. Of course, that was only the start of the time sinks. Due to the various elements, lighting was a bit of a task. And taking the shot itself was no easy feat. The image called for precision, which isn’t the easiest thing with self-portraiture. Even the image I ended up using in the final product isn’t exactly right (head tilted up, cupcake doesn’t cover mouth, and let’s not even start with the outfit), but after near three hours of shooting, it was good enough.

Six hours after coming up with the shot idea, I had an image I was happy with. I emailed it to my sister. 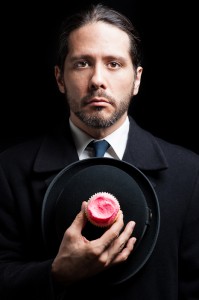 No dice. She emailed me back, essentially telling me the shot was too esoteric for the calendar. She was entirely right, too. A cursory glance at the sample images she sent me would show that my Son of Man nod didn’t fit with any of them. It was unusable.

After spending a quick second kicking myself in the pants, I got back in front of the camera and played around with new poses (some of which had come from her). On the bright side, now that I didn’t have to worry about hovering a cupcake exactly in the right position, I was free to play with the poses. The result was a variety of looks that offered more playfulness and personality. And they were all much, much simpler to execute.

Just as I was about to wrap, I had the idea to do a simpler, more realistic version of the Son of Man shot. I picked up the cupcake, held it in front of my face, and fired off a few exposures. I spent maybe three minutes, tops, getting a good couple dozen shots to choose from. And in the end I wound up loving it so much more than my original shot. It was indeed simpler and, by extension, more accessible. The original photo may have been more technically impressive, but this was a better photo.

Three hours to get a shot, only to realize later that you did it better with the three minute version. If there’s a better cautionary tale for keeping it simple, I haven’t heard it. 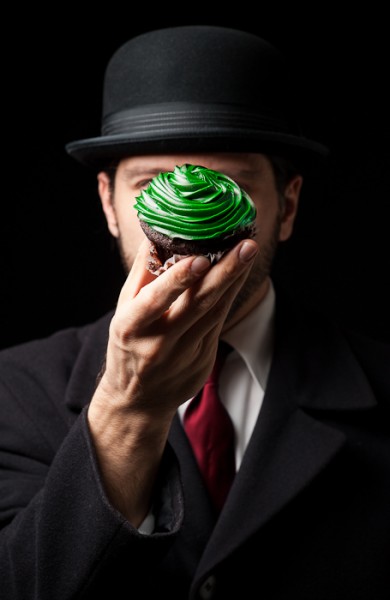