By mike1 November 2012No Comments

Click here to skip to my favorite shots from the evening 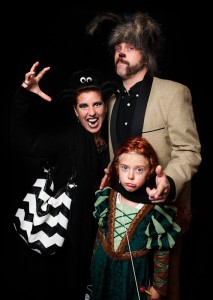 I’ve never really known my neighbors as an adult. Between doing a lot of moving (eight times in the last ten years or so) and living mostly in cities (where you can spend a lifetime overhearing someone’s arguments yet never see their face), getting to know neighbors just wasn’t something I was used to. At best I might chat with another building tenant in the laundry room or hallway, but even those instances were few and far between. It just wasn’t something that came naturally to me. So when I saw that my next-door neighbor was converting his brownstone into a haunted house (at his own time and I’m sure expense as well), I figured the least I could do was offer my studio to trick-or-treaters and their parents, offering to capture their costumes with something a little better than an iphone. 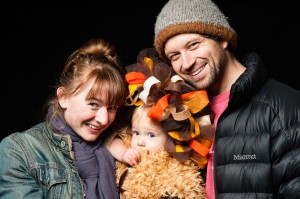 Studio setup was pretty simple since my apartment is on the small cozy side: single speedlight in a beauty dish and a black backdrop. Traffic was a little slow to start, but as people began to realize I was not in fact a chainsaw cannibal, more and more people came by. By the time I wrapped for the evening, I’d photographed almost thirty kids (and more than a few grown-ups) in about two hours. My original plan had been to have an assistant, but while it would’ve eased the workflow it also would’ve meant a lot more portraits. Maybe it’s for the best the trains were down. 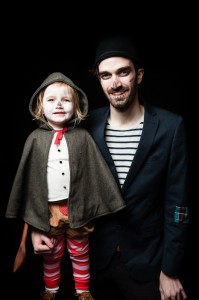 On top of everything else, it was a great learning experience. I’d never seen this many people go through my studio this quickly, and it forced me to keep a healthy pace. In most cases, I had all of three or four shots per subject before they remembered there was candy to be had. That meant that I didn’t have the luxury of setting and re-setting lights, and reflectors, and all that. Time lost was candy lost, and these kids had places to be!

My favorite image from the entire evening, at the top of the page, was pulled off in a single shot (not counting the light test prior). I didn’t have time to pose her. I just asked her to use the bow, and she did the rest. Down to the catchlights, I couldn’t have come up with a better shot if I’d had three hours to do it in.

All said, it was a success of an evening. I saw some great costumes, got some fantastic shots, and, most of all, I finally got to meet the neighbors. I can definitely see this becoming a yearly thing, though if it does I’m making sure to get an assistant next time.