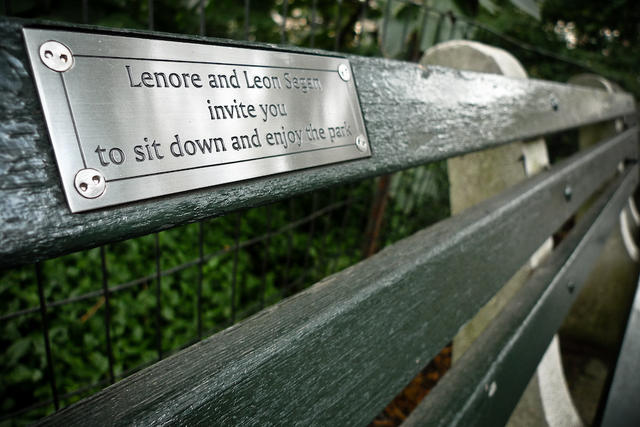 The benches in Central Park can be adopted, and if you donate the tidy sum of $25,000 to the park, you get to have a plaque put on them. As I walked along some of the benches today, I noticed that most of them were memorials to family members, friends, lovers, and loved ones. Some of them were poetic, some were straight-forward, some were cute, some were sad.

I liked this one. So much so that even though I was on my way out of the park after having spent a good hour or two in there, I took a moment to sit and enjoy. It’s a bit of a shame that the bench is right by one of the park entrances and doesn’t offer much of a view, but the sentiment still holds.

As can be surmised, I have made it to New York in one piece, more or less. The move was a schlep-and-a-half, and the next time I move out-of-state I’m not doing it by plane, but I made it mostly intact so I can’t complain too much.

I’ve been here just over a week and I have to say, any apprehensions I may have had about the move went out the door almost immediately. I’ve always felt a connection to New York (beyond the fact that I was born here and lived here until I was seven) and moving here felt, in many ways, like coming home. I do miss my friends and family terribly but, at least for now, this is where I need to be. This is home now, and it feels good to say that.

Though check back with me in about five months when we hit the dead of Winter and see how I feel then.