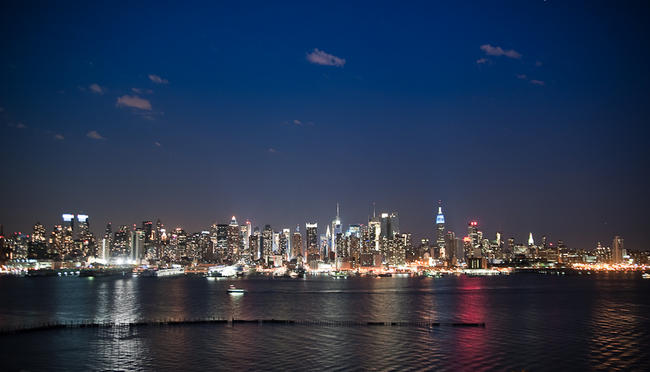 By mike11 November 2009No Comments

I’ve heard it said that the best thing about New Jersey is the view of New York. And while I’m sure it’s intended largely as a dig at New Jersey, I have to admit that the view of Manhattan is good enough that even if Jersey had topless beer wenches serving free alcohol, it would still come in a distant second.

There’s something enthralling about city skylines by night. I suppose the bright shiny lights have a lot to do with it — like magpies, we humans seem to be drawn to shiny, glittery things. But more than that, I think it’s because the city pulses at night.

Anyone who’s ever lived in one will easily attest that a city is a living thing. It’s a creature on a gargantuan scale, with blood coarsing through its veins, non-stop. Cities moan and roar and breathe and bleed. They are born and die and are born again. Yet for all that activity, all that life, a city, when viewed from afar, is a largely static thing. A landscape of glass and steel, frozen.

But at night, that all changes. Under the veil of darkness, lights burn and flicker. Cars — the blood cells that feed its arteries — flow red in one direction, white in the other. Spotlights cut the night sky. Buildings burn bright and then go dark as the night carries on. All of the life that one can normally only feel from inside the city can be seen from the skies themselves.

A city might be at its most alive during the day, but it’s only at night that its pulse can be taken.