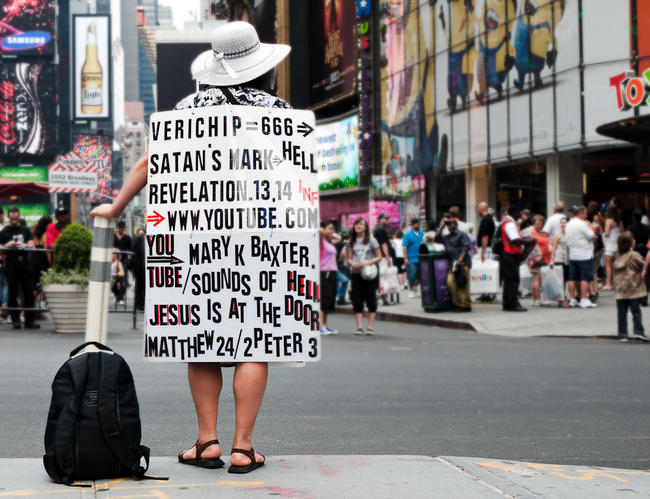 Sometimes I think I’ll never be a “real New Yorker” simply because I actually kinda like Times Square.  It seems that more often than not, just mentioning the words “Times Square” to a New Yorker will elicit responses of “Dear god, why?” (a coworker actually said that to me once) and a disdain normally reserved for Hoboken, L.A., and the Red Sox.

I suppose it’s because Times Square is crowded, kitschy, overpriced, and packed with tourists, yet another thing New Yorkers hate (even though they bring in thirty billion dollars a year).  In any case, most locals seem to avoid it as best as they can.  Myself, I can think of no better place for people watching; nowhere else that offers such a colorful cross-section of hawkers and gawkers, hustlers and busters, and everyone in-between.  Take for example the woman above, who I noticed earlier today while I was in Times Square picking up my Key to the City (more on that later).

She was standing in the middle of Broadway right in front of 44th St, wearing Gloom & Doom sandwich boards while speaking in tongues.  Well, either tongues or some language I’ve never heard at a pace that made it impossible to decipher (my money’s on tongues).  Luckily it occurred to me to take a video of this Midtown Medium.


Tell me – where else can you find someone preaching in tongues, not a hundred feet from a Toys”R”Us?  And the oddities don’t end there.  Just last night I was also in the area, celebrating a friend’s birthday with some dinner and  Toy Story 3 when we saw what could only be described as Batman’s Tricycle come roaring down the street. 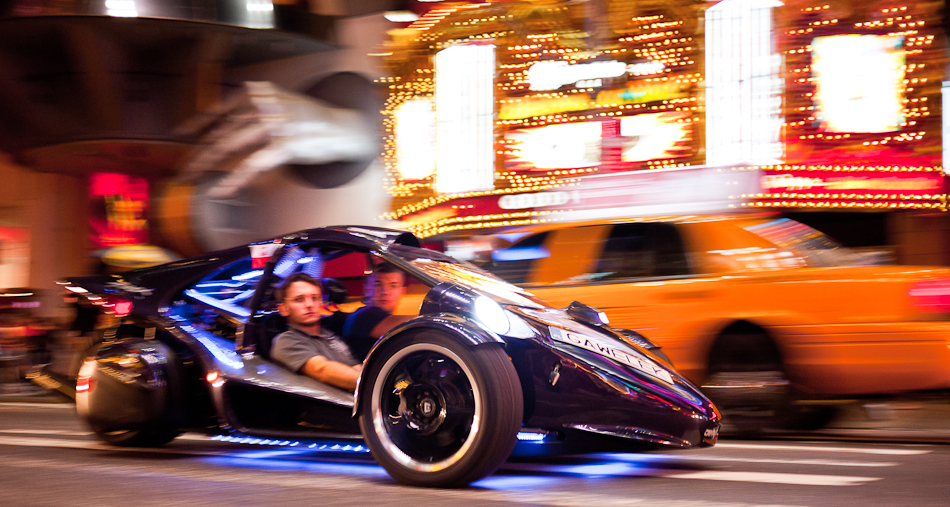 I’m not entirely sure what it was, but it had three wheels (two up front, one big fat one in the back), neon everywhere, and GAWELEK emblazoned on the front.  Clearly not the world’s subtlest ride, but then you don’t take something down 42nd because you wanna keep a low profile.

As for what brought me to Times Square today, I was there hoping to get myself a Key to the City—part of an art project that involves 25 special locations that can be unlocked with a single key, obtained at their kiosk in the heart of Times Square.  The locations remain active until Labor Day but they stop handing out keys tomorrow so I wanted to be sure to get one.  I had stopped by after work yesterday but people at the front of the line said it had taken them almost an hour and a half to get there and I had a dinner to get to.  Went back today and the line was so short it took me all of ten minutes to get my key and be out of there (go figure). 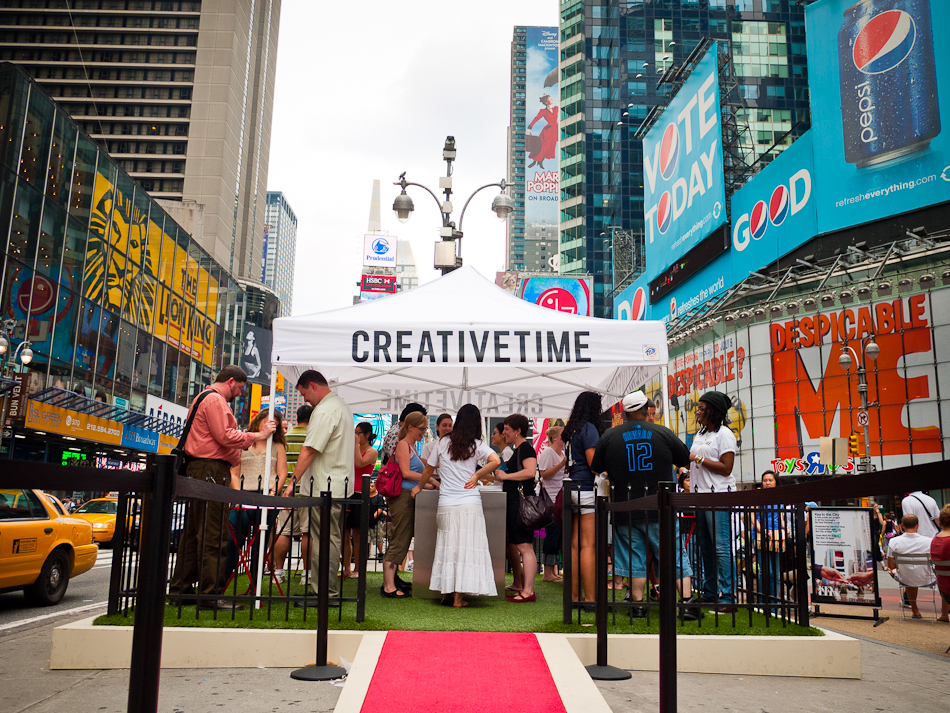 Naturally, Keys to the City aren’t just handed out willy-nilly.  Such a high accolade deserves a proper ceremony to commemorate it, one that actually requires a second person to present it to you (and you to them).  Luckily the guy behind me in line was also there by himself and so we became Key Brothers, bound by the solemn oath and sworn duty of bestowing this honor, until it was over and we went our separate ways.

After receiving my key, I wandered around for a little bit before heading home, spotting this along the way: 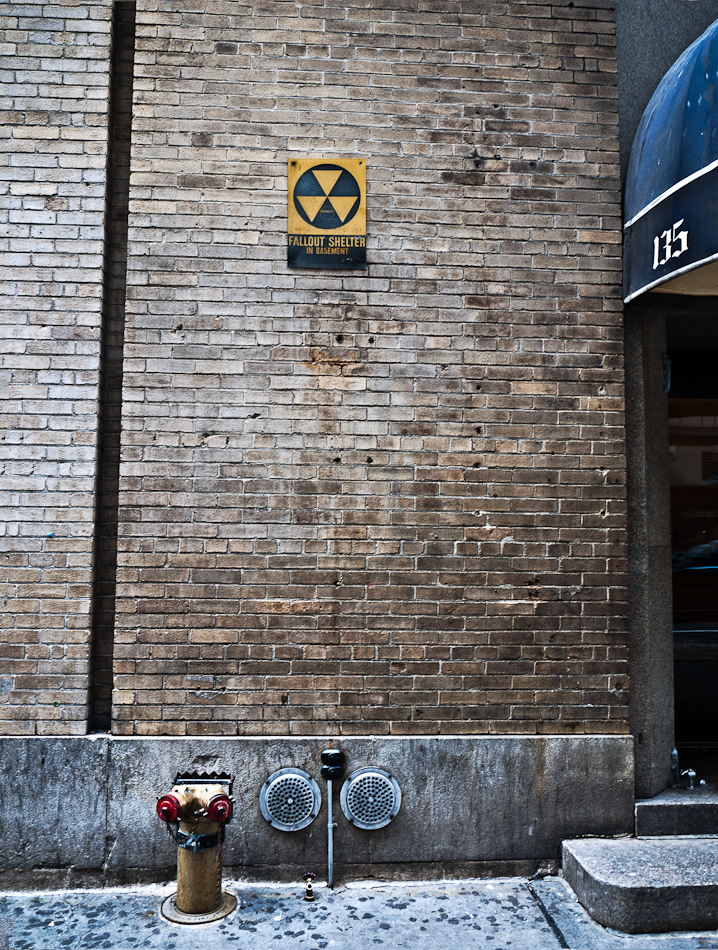 I’m really curious if the fallout shelter is still there, and just how secure it could be.  I can’t imagine a bunker ten feet below street level would be very safe.

All in all it was another fun, productive visit to Times Square, one of my favorite places to go to people watch.  For all the sniffing and eye rolling and head shaking that most “real” New Yorkers have for the place, I defy anyone to tell me where else I can find a doomsayer speaking in tongues, Batman’s go kart, a nuclear fallout shelter, and a station offering Keys to the City, all within a few blocks of each other.

In unrelated (though very good) news, JD is still with us, alive and squeaking.  Upon arriving at the vet for what I thought would be his euthanasia, I was informed that the golf ball-sized tumor I had assumed was inoperable was, in fact, not.  It wasn’t cheap (won’t say exactly how much but I will say I could’ve bought an iPad and had some scratch left over), but I couldn’t in good conscience put him to sleep knowing something could have been done.  Pets are family, after all, and keeping your family safe is worth any price. 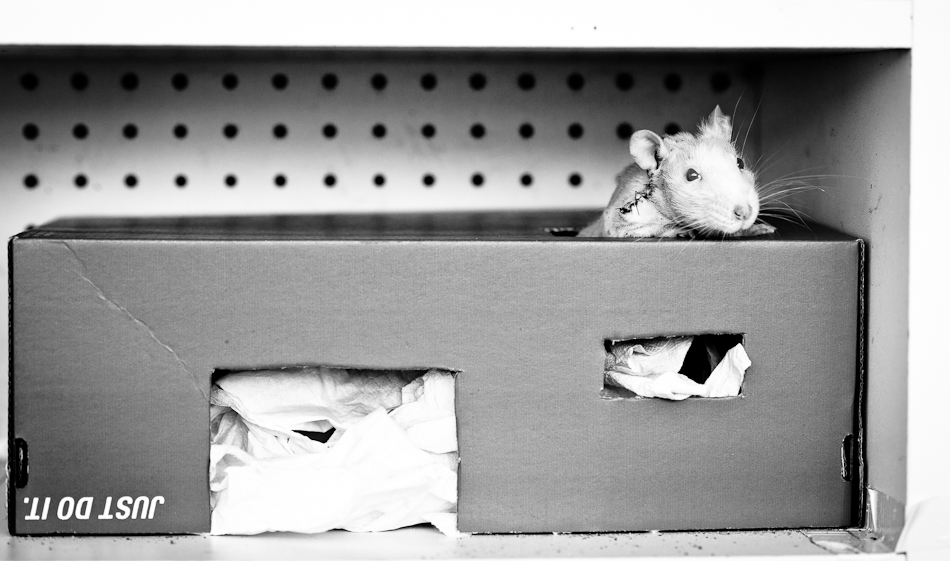 In completely related news, if you or anyone you know is looking to hire a photographer, hit me up.  These vet bills won’t pay themselves.