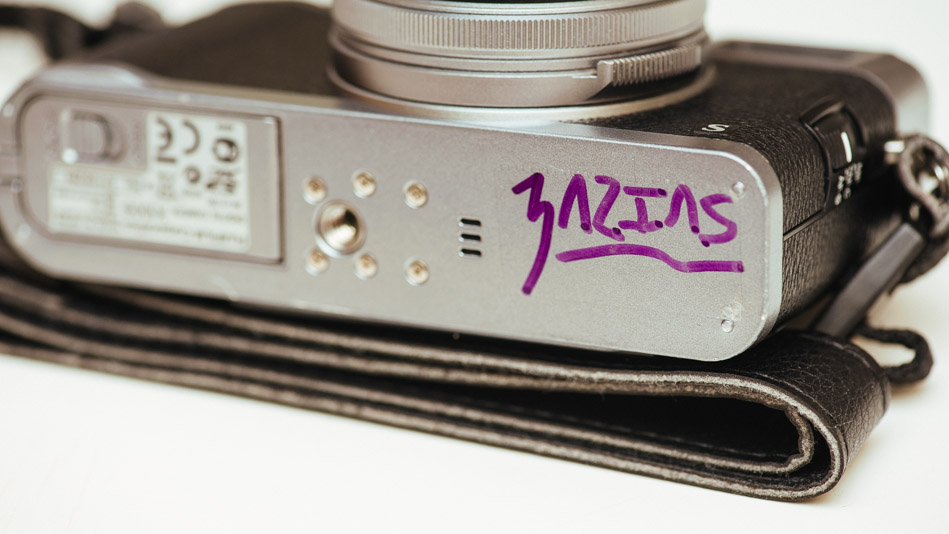 I’m not an autograph hound. It’s just not in my nature. I enjoy the thrill of a celebrity encounter as much as the next guy, but I never feel compelled to get an autograph or ask to have my picture taken with them. I just don’t really see the point, to be honest. I don’t need a photo to remind myself of the experience, and I don’t feel the need to prove it to others, so I don’t really bother. (This is more or less the same reason why I don’t have photos of myself in front of landmarks or exotic places). Which isn’t to say I haven’t collected some autographs. But it was never just for the sake of the signing. What was signed was just as important. Ben Lee signed my iPod, for example. Neil Gaiman signed my old work badge.  Stuff like that.

Fast-forward to today, idly wandering the PhotoPlus floor. I turn a corner and spot Zack Arias‘ beard not twenty feet away, in front of the Fuji booth (makes sense). I’m a big fan of Zack’s work and his writing, and it was a treat to see him on the expo floor. “Oh hey,” I think to myself, “that’s Zack Ar–”

The new thought didn’t wait for the last one to finish.

Of course. It was so obvious. Zack was not just a fellow brother in the Cult of Fuji, he was one of its greatest prophets, singing on high the (well-deserved) praises of the X100s. I looked at my trusty camera, slung across my chest. I had to get him to sign it.

After a nerve-wracking search, constantly looking over my shoulder to reassure myself he hadn’t walked away, I finally managed to procure a sharpie (a purple one at that) and tap Zack on the shoulder.

I should take a second to point out here that I’m not a novice photographer. I’m no Greg Heisler, but I like to think I know my way around a portrait. I’m pretty comfortable directing people. I don’t get flustered by important subjects. I try to say “Make your portrait” instead of “Take your picture” because it carries a little more weight. I visualize poses before I even approach someone with my camera. I come prepared.

So I thought little of it when, as I handed Zack my camera to sign, I asked if I could “make his portrait” with it. He gamely obliged and handed back the newly-autographed X100s. I put it up to my eye and ..

My mind was a blank. Crickets chirped. Sitting in my living room now, hours later, a million ideas come to me. Have him sneer like Popeye. Or gape at the Fuji display longingly. Take a close-up shot just of his beard. Get a bunch of passers-by to “We’re not worthy!” at his feet as he lords over them. It’s easy to come up with stuff now. But at that moment, nothing. Tumbleweed. And I was so afraid of wasting his time that I just snapped. And instead of getting greatness, I got a pleasant shot of an expectant subject.

I thanked him and rushed off, trying not to waste any more of his time than I’d already taken up. Naturally, as soon as I turned the corner I started kicking myself for choking so badly.

I was able to redeem myself, somewhat. I quickly remembered that I had always wanted to thank him for championing an idea I’d had, so I went back to mention it and we wound up talking for a few minutes. I didn’t get to mention the other X100s-improving ideas of mine, but it was still a fun chat and I like to think I didn’t come across as such a starry-eyed dope the second time around.

I wasn’t able to bring myself to ask for another portrait, though. Some things you just get one shot at. And while my feeble attempt at a portrait was about as compelling as a Driver’s License photo, hopefully I’ll at least learn from the experience and not choke so badly the next time I photograph one of my photo heroes.